April was Sexual Assault Awareness Month.  I know, I know…it’s the first of May.  But I couldn't let the month of April melt away without posting something about the rape culture that is permeating our society.

In 2013 a video surfaced out of Saint Mary’s University in Canada:

During the backlash surrounding the viral video, President of Students’ Association, Jared Perry, admitted his own involvement with the gathering, but said he and everyone involved “showed a ton of remorse.”  Just a ton of it!  Afterward, he made a comment I believe is definitive of the culture we live in today:

“It’s one of those things you don’t realize until after the fact.”

It reminds me of the story of Sylvia Likens, an Indiana girl who was tortured and sexually abused until her eventual death in 1965.  What is most startling about Likens’ story isn't that she was sexually abused at the hand of children, but that the children had no idea they were doing anything wrong.  More to the point, they were following their culture.  Similarly, there is something fundamentally wrong with young women essentially painting a “RAPE HERE” sign on their chests, and then settling back to wait.

Earlier this week, a 14-year old Massachusetts boy was arrested and charged as an adult in the attempted murder/rape of his 8-year old cousin.  According to WUSA9 Boston, the boy held the girl hostage with a pair of scissors as he attempted to rape her.  Now, I am in no way suggesting this boy’s actions were anything but abhorrent but--charged as an adult?  Our brains are not even fully developed until our mid-to-late twenties, and there are some experts who say that a child’s developing brain is not dissimilar to a sociopath.  Besides, our ideals about sexuality develop through the culture we live, and sexual socialization begins at home.  So what in this boy’s life made him rationalize this behavior?

I feel like we can’t hold this boy solely accountable for his actions, no more than we can blame the students of Saint Mary’s for submerging themselves in the rape culture permeating every aspect of college life.  We live in a culture which likes to narrowly define our sexual mores.  But sex is not a narrow subject, nor is it always pretty.  There is a dark side to sex, perpetuated by our sexual ignorance, and it is past time we strip away our cultural taboos and have a real conversation.

Sexual socialization begins at home, so educate your kids.  Not just about the biology, but teach them about pleasure and intimacy, as well as STIs and rape.  It will be an uncomfortable conversation, I have no doubt, but it is better than the sexual misconceptions that often get our youth in to trouble.  And maybe, eventually, we can move past this ideology of sexual assault that has permeated our society for far too long.

Sexual assault is a somewhat personal matter to me, and one I will more than likely be discussing a lot in future posts.  No one should feel like they need to deal with sexual violence alone.  Below are some links.  If you or anyone you know has ever been a victim of sexual assault, I encourage you to contact someone.  Believe me, there are people out there who can help.

The Gospel of Given Fucks

Now that Easter is over, and we have all resumed the hedonistic lifestyles that consumed us before Lent, I can post the first entry in to a blog I’ve wanted to start for awhile. Sex and a Cup of Coffee is a page I want to become a forum for people who question issues about sex and sexuality, gender and identity, or just society in general.

And coffee!  I love a good cup of coffee.

Today I’m sipping on a fresh cup of Foldger’s (I know, nothing too fancy).  But if anyone out there has any suggestions for my morning brew, I’m all ears.  I like sex.  I like coffee.  Put them together and—viola!—we’ve got ourselves a fucking blog.

Now, I’m not bragging, but I know A LOT about sex.  I enjoy discussing sex, and all the forbidden taboos that come with it.  I am also a stickler for facts.  That’s why I’ll be citing all sources I quote at the end of each blog.  But that’s not to say that I can “internet” the answers to everything.  I’m not too proud to admit there are still things I don’t understand.

I mean, he had one, right?  He was the SON of God.  And yet Christianity has for centuries suppressed the biological urges which come from being a male, yet alone a pre-Christendom male under Roman rule.  For me, it’s one of the saddest aspects of the Christian religion.  After all, Christ was sent to earth by God himself to die for the sins of an entire people…and we can’t even let the man get his fuck on?
The subject of Christ’s sexuality has been hotly debated almost as long as the Bible itself.  Some, like Louis Crompton, author of Homosexuality and Civilization, suggest Christ may have been homosexual, the Apostle John his lover, and that Jesus may have engaged in sex with young prostitutes (Crompton 111)—a lot of speculation since relatively little is understood about Christ’s personal sexual practice.  Others believe Jesus to be married, that he sired children and had a family.

In her 2012 paper, Jesus Said To Them, “My Wife…”, Karen L. King of Harvard Divinity School discusses the discovery of an ancient scrap of parchment dating back to the 2nd Century in which the author mentions Jesus’ wife.  And while, as King explains, this discovery in no way proves Jesus was married, it does shed light on the role women played in the early church (King, 2014). 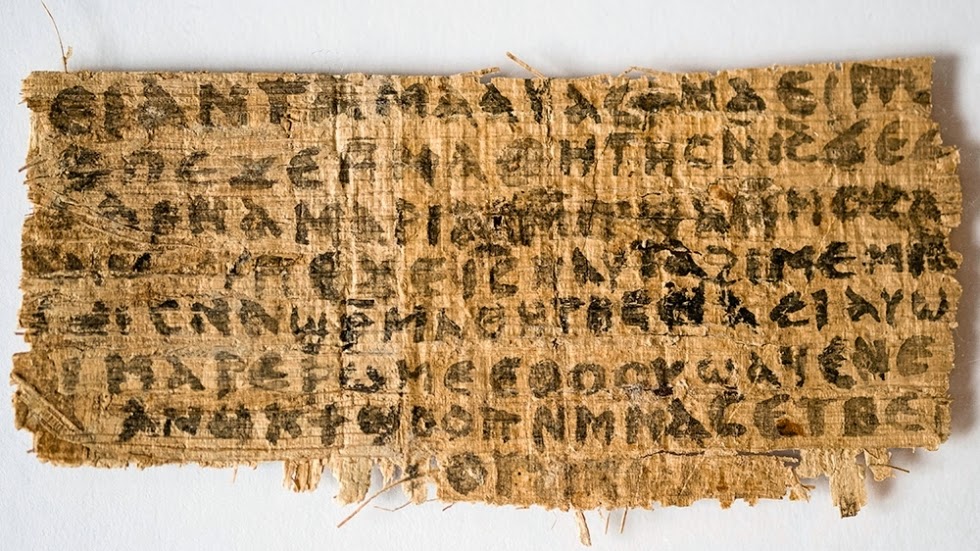 So was Christ gay, involved in a relationship with one of his apostles while cavorting with male prostitutes?  Or did the historical Jesus succumb to the cultural practices of his Jewish heritage, taking a wife and possibly fathering children?  The answers to these questions have the potential to blow the doors of Christianity wide open, especially considering the object of their faith is a man whose very birth revolved around virginity.  But why did Mary have to be a virgin?  Why couldn’t Christ get married, or even suck a cock once in awhile?  Who actually gives a fuck if Christ fucked?

It is worrying about the sexual practice of everyone else that has led to modern religion’s cognitive dissonance about human sexuality.  We live in a culture where we are afraid to talk about sex, where our children are bombarded with images of sexuality while being told to suppress their urge to fuck.  This is why we live in a culture of misogyny, where the female body is still a mystery and rape is one of those gray areas that can usually be explained away, usually at the expense of the victim.  It is this ignorance over human sexuality that kept blacks and whites from marrying in the 50’s and 60’s, that homosexuality remained on the Diagnostics and Statistics Manual as a mental disorder until 1978, and why men were permitted by law to rape and beat their wives as late as the 80’s.  Misguided sexuality is the reason basic human equality is still something we have to fight for, instead of the God-given freedom it should be.

So let Jesus fuck, I say.  It’s been over 2,000 years and the man needs to bust a nut.  Better yet, don’t even think about him spilling that God seed everywhere.  It’s none of your business.  The truth is this…it is extremely unlikely any of us will ever know the absolute, irrefutable truth about Christ’s marital status and sexual practice.  To claim we know for fact Christ was celibate, or gay, or married with children is akin to admitting the sexual ignorance that is so prevalent in today’s culture.

So let’s have a realistic conversation about sex for once.  Go out and fuck.  Jerk off if you have to.  Allow yourself the orgasm we have so long denied Jesus Christ.  Everyone fucks.  It is only natural Christ did too.  Maybe once we realize this, society will feel more united as a species, and we can move forward a little more as a civilization.

Or maybe I’m just talking out my ass.

So there it is…my first blog entry.  Any further information or feedback isn’t just appreciated, it is encouraged.  That is the point of this blog, after all—to have an open, honest discourse about the complexity of human sexuality.  And I know it’s unrealistic to think I’ve written this without offending anyone.  That is not the intent of this blog.  I respect all religious beliefs and meant zero disrespect for anyone of the Christian faith.  I just believe there comes a time in our lives, in our faith, when we put childish things aside.  It’s time we look at sex and religion in this country in the same way.

Now go forth and fuck, and vaya con Dios.