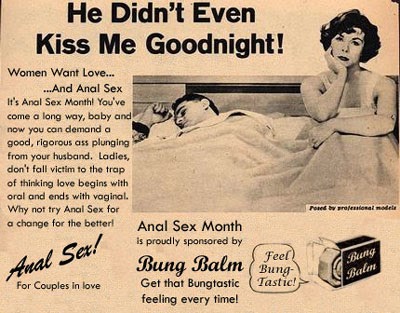 What was once considered taboo has since become so mainstream that in 2005 the CDC reported that about 40% of men and 35% of women have had butt sex at some point in their relationships.  Quite a leap from the meager 11% Kinsey reported in the 30’s and 40’s .  But with all of this butt stuff going on, there are still misconceptions about the practice, pleasure and hygiene of anal sex.  While not a taker myself (full discloser, I didn’t even think the ass was hot until I met my husband), I am still a proud practitioner.   So here are some standard things I’ve come to learn about taking it up the butt:

There’s really no way of getting around it.  When we talk about butt stuff, we also need to talk about poop.  And shit happens, boys and girls.  It’s not pretty, and can be downright embarrassing at times.  But the anus serves a particular biological function, and that is to excrete waste through the same hole you may want filled.  For some people, the thought of poop-dick is enough to turn them off to the whole idea of butt play.  But there are plenty of ways to combat Mother Nature, and here are a few:

Ø  Shower
Ø  Douche
o   Admittedly, this one is a bit tricky.  Douching in any form can damage the natural enzymes within the rectum, and using some sort of hose or attachment can hurt the colon.  Still, there are tools out there if you look in the right places.  So research your options, know your body, and use caution.
Ø  Diet and exercise.
o   What goes in must come out, and fruits and berries and lots of fiber make the whole process that much easier.  Add exercise to the balanced diet mix, and your body is a well oiled machine…almost.

Oral sex is not just for the genitals.  In fact, a tongue in the bum can feel amazing!  Not only does rimming feel good, but it can get the body’s natural juices flowing, relax the sphincter, and make the overall experience more pleasurable.  But again, good hygiene plays a factor.  A clean butt goes a long way, but even the cleanest of holes can harbor unhealthy bacteria and other things just waiting to get into you.  So if you kiss your partner down there, keep the tongue action on the outer ring of the anus.  In other words, stick to the hole.  For one, it’s safer.  And two, there are way more nerve endings outside than there are in.

3.  Lube makes the world go round.

No matter how much you spit on it, lubrication does wonders.  Bung-balm knew the importance of lube, and so do condom companies.  Most condoms come pre-lubricated for his and her pleasure.  Not only does it feel better for the top and bottom, but it reduces the tearing that can occur during anal intercourse.  It literally makes the whole experience smoother, so use lube.  Water-based lubricants are more practical.  Once it feels like it’s wearing off just spit in your hand and you’re back in business.  There are also a number of flavored lubes, if you’re feeling particularly frisky.  Pick from kiwi-strawberry, chocolate or...bacon?  There is a fucking bacon flavored lube, people!

America!  Am I right?

To Cut or Not to Cut 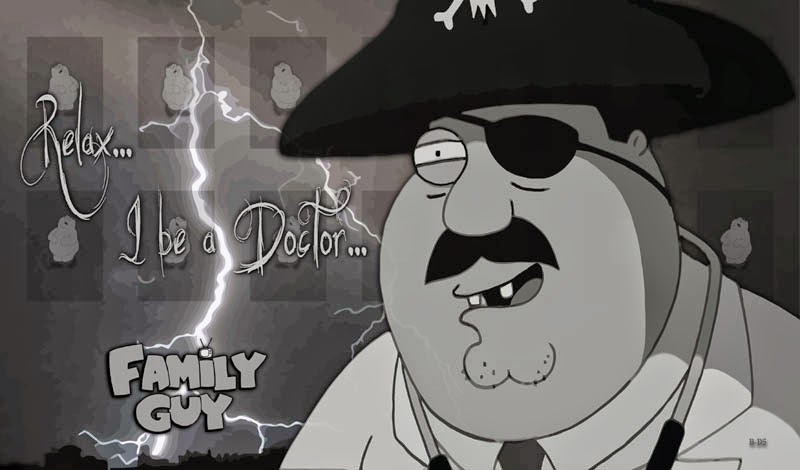 I don’t remember the day I was circumcised.  I imagine it was a living hell—some gigantic beast of a man coming at my tiny pink prick, which I’d only just discovered a few happy weeks before, with a goddamn scalpel.  Not exactly a good first impression on the world, but what was I going to do?  I was a baby.  The whole damn world was pain and food at that point.  Besides, memories aren’t really formed until a few years later, so I’m good.  No PTSD or anyhing.  I don’t remember shit.

However, some guys are pissed they never got a say in their circumcision.  Like this guy: 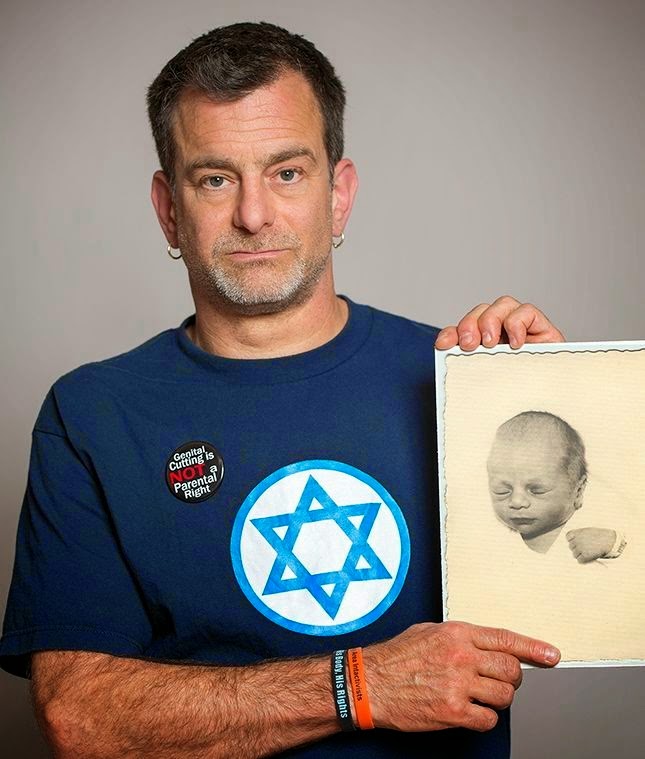 And believe me, he isn’t the only one.  Thousands of American men—and I say American men because most European countries cannot believe we still routinely circumcise our children—are shitty because their parents literally chopped off a chunk of their dicks.  And why shouldn’t they be?  After all, we don’t circumcise our girls.  Female circumcision is considered barbaric, an atrocious act of mutilation.  So why the hell are we doing it to our boys?  Shouldn’t boys get to decide what is best for their cocks?

Children are already subjected to a shitload of stimulus early on.  Add someone mutilating their genitals to the mix and small wonder penis anxiety is so damn rampant in our culture.  So today I judge the history of circumcision, as well as the benefits and risks of this ancient ritual and rite of passage of infant males.  Ultimately, though, the decision is up to the parents.  But not the baby… 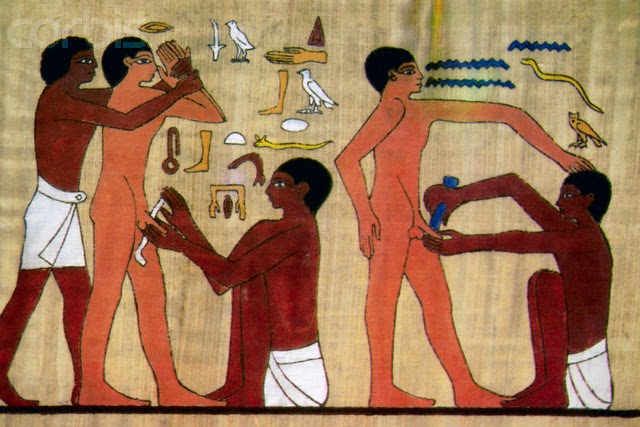 Circumcision is the removal of the foreskin (prepuce) from the head (glans) of the penis.  For millennia this ancient practice has been allowed to exist, though it was Abraham in the Torah who really made it a cultural phenomenon:
“And God said unto Abraham: 'And as for thee, thou shalt keep My covenant, thou, and thy seed after thee throughout their generations. This is My covenant...every male among you shall be circumcised. And ye shall be circumcised in the flesh of your foreskin; and it shall be a token of a covenant betwixt Me and you. And he that is eight days old shall be circumcised among you, every male throughout your generations...And the uncircumcised male who is not circumcised in the flesh of his foreskin, that should shall be cut off from his people; he hath broken My covenant.”
God wasn’t fucking around—if you were uncut then you were cut off.  Then again, God was dealing with his own penis anxiety.  Just read the Old Testament.  There are so much cock shenanigans you can almost hear the Benny Hill music.  Like these verses:

“Then Saul said, ‘Thus shall you say to David, “The king desires no bride-price except a hundred foreskins of the Philistines, that he may be avenged of the king’s enemies…’ and David brought their foreskins, which were given in full numbers to the king, that he might become the king’s son-in-law” (1 Samuel 18:25-27).

However, even the earliest Jews seemed to take a firm stance against circumcision.  Moses apparently refused to circumcise his people while Joshua went to work like a Hibachi chef once Moses was dead.   Rome outlawed  circumcision altogether, deeming it a barbaric practice, so the Jews did all kinds of crazy shit to their dicks to assure they stood apart from those filthy Romans.  And all the while Jewish men grew shittier and shittier until they finally decided to take matters into their own hands…so to speak.   According to one author:

“It may have been around this time that the Pondus Judaeus (also known as the Judaeum Pondum” , a bronze weight worn by Jews on the residual foreskin to stretch it back into a foreskin, gained popularity amongst Jewish males.”

Ancient Jews were trying to restore their foreskin even then, a procedure, admittedly, that has made quite a few medical advances in modern times.

But we’ve come a long way since the days of Moses and Joshua arguing over our penises, or since chastity belts and Graham Crackers threatened to keep our hands off them.  The medical community is wiser also, and so are we.  Perhaps that is why the CDC reports a 10% decrease in circumcision between 1972 and 2010.  Even so, Americans are still concerned something bad is going to happen if we don’t circumcise our boys. 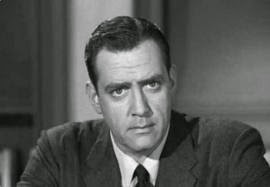 Except in rare cases, the foreskin comes standard on every male child.  And like most everything else we are born with, it serves a function.  Mainly, it protects the glans of the penis which is rather sensitive to the touch, and some people claim this either reduces or increases sexual pleasurability later in life.  Others argue circumcision protects against UTIs, as well as HIV in more impoverished countries.  As a result, the World Health Organization has launched a circumcision campaign in Africa to help combat HIV risks.

But why do people circumcise their children?

What does the science say?

Religiosity is the primary reason parents choose to circumcise their children, followed closely by the ominous thought “What will the other boys think of my son’s penis?”  The science, however, is sketchy at best.  So inconclusive is it that the American Academy of Pediatrics says “the benefits of circumcision are not significant enough to recommend circumcision as a routine procedure and that circumcision is not medically necessary.”

So there you have it.  Even the AAP is shrugging its shoulders saying, “Don’t look at me.”  But since they brought it up, what are these benefits they speak of?

Research indicates that circumcision does in fact reduce the prevalence of UTIs in infant males, a condition that affects about1% of infant males under 12 months of age and is easily treatable.  Circumcision has also been shown to reduce the risk of phimosis, a condition which hardens the foreskin, but, again, the prevalence of this is so low it hardly merits mentioning—about .4% of 1000 infants and .6% by puberty.

Circumcision has been shown to reduce the incidence of HIV infection later in life, though only between male/female partners.  According to the CDC:

According to the website kidshealth.org, there is little evidence to support that circumcision affects sexual function in adult men.  However, research out of Denmark—where a large percentage of men are uncircumcised—suggests otherwise.  According to a 2011 survey of Danish men and women, “Circumcision was associated with frequent orgasm difficulties in Danish men and with a range of frequent sexual difficulties in women…”  Among the most common female complaint was “incomplete sexual needs fulfillment,” otherwise known as not getting her O.  And guys, I’ll never be able to express this enough:

So there it is—circumcision in a nutshell.  Circumcision has been around since time immemorial, and has been the source of some historic controversy.  Science shows there are some benefits to circumcision, such as a lower incident rate of UTI and HIV infection, though it seems to be conflicted on whether or not this is substantial enough to declare, as God did, that all male infants be circumcised.  Meanwhile, you may be fucking up your kid’s sex life in the process of some religious ritual, or just because of your own penis anxiety.  The decision, however, is ultimately up to you…the parent.

If there is something wrong down there, by all means take care of it.  If there’s nothing wrong and you still decide to circumcise…well, research would suggest that you are perhaps a sadistic monster.  But I wouldn’t worry about it too much.  After all, your kids won’t remember, so no harm no foul—right?
Posted by Unknown at 11:44 AM No comments: