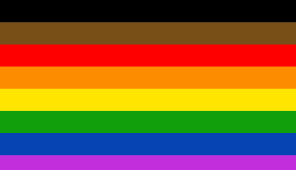 Earlier this month my husband shared with me a Facebook status he posted last year during Pride Month.  I thought it was touching, especially in light of the recent political climate, so I asked if I could share it on my blog.  He said yes.  May his words make us all feel proud.

For Pride Month I want to share a short quote I found while researching gay rights groups in the early to middle Twentieth Century. This comes from "The Ladder," a publication circulated by the Daughters of Bilitis:
"The day will come--in SEVERAL CENTURIES perhaps--when people will not scorn, persecute or jail the homosexual."
This was published in 1957. I have added the emphasis. I am not saying that we are there yet. Indeed, the LGBTQ+ community is still scorned, persecuted, and jailed, perhaps in lessening instances, even in the US. But we've made a lot of progress. More progress, in fact, in the last 60 years than the first brave activists of the Twentieth Century could have imagined. They genuinely expected that they would never see the fruits of their efforts, that their successors and progeny would never see the fruits of their efforts. It would take CENTURIES for the dream of equality to be manifested. And why not? Nothing was changing quickly for us in the McCarthy era. The ideas of freedom, peace, and love in the 60's didn't apply to us in any marked way, certainly not in many legal ways. The AIDS epidemic was largely ignored until the 90's. We lost so many good people and great minds through disease, intimidation, fatigue, and even assassination. "Centuries" sounded about right.
We kept fighting. The Compton riot, the Stonewall Rebellion, Pride.
History hints that it was transgender members of the LGBTQ+ community that first stood up and fought back, changing the discourse of equality from a passive idea of acceptance through assimilation of heteronormativity to a powerful, defiant voice that, in the end, lifted us up from the realm of the "deviant," to stand a little closer to the shoulders of the "normal."
There is certainly more work to do. For too long and for too many in the LGBTQ+ community many of those letters are silent. Transphobia is all too real and becoming ever more vocal. And still, we are reluctant to discuss the challenges with their lives and the lives of bisexuals, the queer-gendered, asexuals, intersex individuals, and the disabled lest we risk casting off parts of the mantle of our own acceptance to throw our hats in with those who society still perceives as "deviant" because, indeed, our "normalcy" and acceptance is rooted in the heteronormative. The early gay rights activists of the Twentieth Century were no different starting out. We were all in the closet then, and it was safe there. Exposure meant throwing off that security. Perhaps, for many of us now legally married, with many other legal protections for ourselves and our families, find ourselves in yet another closet, a comfortable place of "normalcy." But we can't stay there. Lives depend on the bravery that lies ahead.
And it seems it may take centuries, yet. But we have come such a long way, and it didn't take nearly as long as our predecessors had expected. I don't think what lies ahead will take as long as we think either. That's something to be proud of.
Happy Pride, everyone!